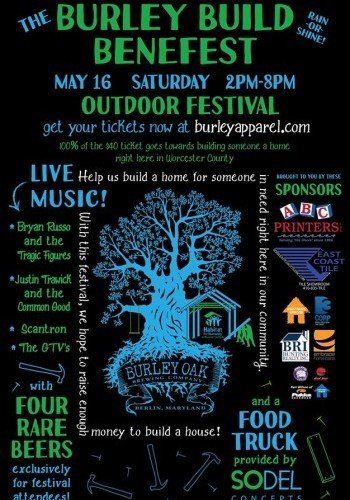 Let’s recap two things that we absolutely love here at ShoreBread. The first is supporting locally owned and operated Eastern Shore businesses. The second is the incredible amount of support our local community gives to fundraising efforts. When those forces combine into a ‘benefestival’ hosted by local businesses…in one of our favorite small towns…to support an amazing local non-profit…well that is absolute perfection.

Enter, the Burley Build Benefest. Burley Oak Brewing Company is hosting the Benefest on Saturday, May 16, in an effort to raise enough money to build a house for someone in need – right here in our community! Live music, four rare beers on tap, a SoDel Concepts food truck on scene, and games like Giant Jenga? All in partnership with Habitat for Humanity of Worcester County? Details please…

Musical Stylings Courtesy of: Bryan Russo and the Tragic Figures; Justin Trawick and the Common Good; Scantron; The GTV’s

Grub: A food truck will be on the scene – provided by So Del Concepts (food is not included in ticket costs)

Brews: Four RARE beers will be available exclusively for the occasion and for festival attendees. Note: this is a 21 and over event.

There will also be an art market set up at the event, with 20% of the sales going to the Habitat for Humanity of Worcester County.

Why: For starters, the crew at Burley Oak seriously knows how to throw down for an event. Beyond being purveyors of delicious craft beers, they are also notoriously talented at selecting quality live music. But perhaps most important of all, the Burley Oak team never passes up a chance to help out a local charity. If you’ve never been to one of their charity nights staring local celebrity bartenders than you’ve been missing out.

Can’t Make It?: No worries, people can always visit habitatworcester.org to make donations. There are also t-shirts available for sale at the brewery and online at burleyapparel.com, with all proceeds going to the Worcester County Habitat for Humanity.

Future Benefests?? According to Chavis, the overarching goal is to hold a Benefestival each year, with proceeds supporting a local charity or non-profit organization of choice. The idea came to fruition after brainstorming and working with local Habitat Director Andrea Bowland on their annual Gala. They came to realization that much of the cost for fundraising events was spent on location. “We felt that holding an event at our location would provide a venue where the costs could be lower for the organization itself,” explained Chavis. “With the savings on costs, it enables us to host an event where the ticket price could be lower so that a new audience could attend. This not only draws a different audience than the Gala does in our local area – but since we already market our beer to an audience that is all over Maryland and Delaware – we have another group of people to reach for support.” Chavis added that the idea (and name) for the Benefest came from working with Bowland and the Habitat for Humanity of Worcester County. When asked if the Burley crew would be participating in the build once the funds are raised, the answer was an affirmative “absolutely!!”

Hope to see you all next Saturday!