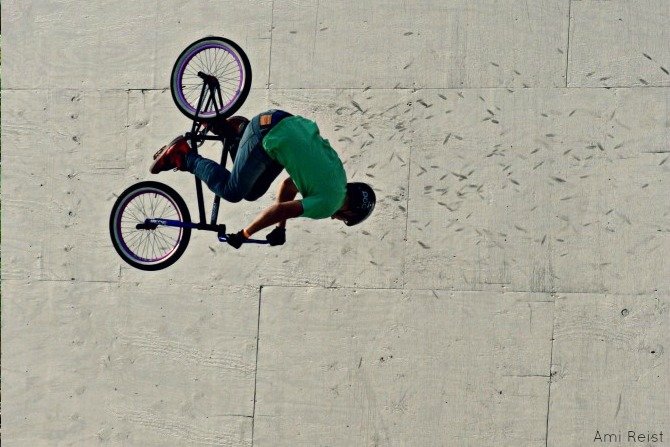 When asked about his signature trick, Jordan Prince, a blonde-haired BMX rider from PA, looked at his friend, Justin Cramer, a BMX rider also from Lancaster, for his input. The two discussed a few tricks and then Prince said, “360 or 720. Those are my signatures.”

A 360 is a full aerial rotation of both the bike and the rider around a vertical axis. 360s are performed at a slower speed on a flat surface or at higher speed during jumps. The trick begins with a bunny hop, takes to the air, the body is twisted completely – the bike rotates while still in the air, and then both wheels meet the ground as the rider sits back down.

The 720 is more difficult than a 360. It involves spinning the bike around through two complete revolutions with feet off the pedals. A rider must get back on the bike, mid-air, and spin around one more time before landing. Impressive, right?

Prince landed many 360s and 720s while practicing and competing on the Dew Tours BMX ramps.

The 16-year-old lives in Lancaster, PA and has recently been traveling around the states participating in BMX competitions and several Free Flow Challenge Tours. Last July, Prince placed in one event. That finish took him to the Gatorade Free Flow Tour’s stop in Lakewood, NJ at the Incline Club. Prince placed 2nd last July at that event.

Prince looks forward to biking stellar venues, like the Dew Tour’s set up on the beach at Dorchester Street last week. In Lancaster, there aren’t any public BMX parks – a few skate parks – but not any parts that allow solo BMX riding. The riders make do by building ramps in their driveways.

“I usually practice at my friend, Zach Dunn’s, house in Northern Lancaster,” said Prince. The ramps and BMX course at Dunn’s house can be seen in the YouTube video below. The colorful shark ramp is easily identifiable in many other central PA riders’ videos.
During his last contest, Prince competed against 27 individuals and seized first place. The first-place finish granted him a chance to participate in the Free Flow Challenge during Ocean City’s Dew Tour. During Free Flow, Prince competed against 21 other BMX riders.

Prince has been riding BMX for three and a half years. His favorite bike brands are Hyper bikes and Colony bikes. The BMXer chose to ride a purple Hyper bike in the competition.

When asked to offer some words to other competitors at the event, Prince said “Definitely expect to see me again next year,” as he smiled and placed his helmet back on his head. Within minutes, the rider was back in the park riding.

Pro BMX riders, Morgan Wade and Colton Satterfield, judged the BMX Park event during the Free Flow Tour in OC. As 21 riders threw down on the tour’s massive park course, talent was abounded and riders were really showing the judges what they could do. At stake – a spot in the Dew Tour prelims.

Prince came in a little further down the list, placing 11th out of 21. His score of 80.00 and his tremendous rides that day could be easily be respected.

Prince enjoyed his time in Ocean City – He took advantage of his Free Flow Competitor pass and watched the rest of the Dew Tour with friends, stayed with family in Ocean City, and rode the Sling Shot on the boardwalk where he lost his cell phone. No worries, though. Prince will be leaving the Free Flow Tour with memories, practice, and new skills to continue his BMX career.