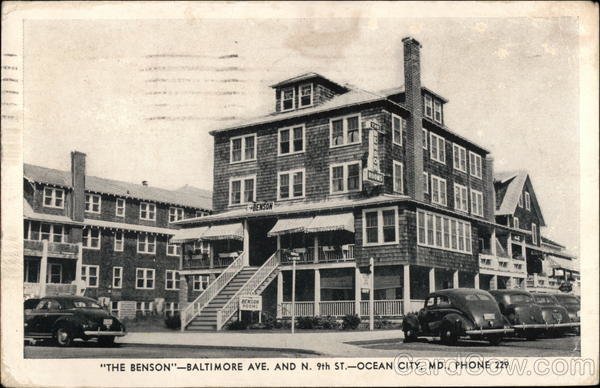 The Wellington Hotel is a stately building with a shaded front porch, aged trees out front, a large parking area to the north, and is located less than one block from the beach on 9th Street and Baltimore Avenue in Ocean City, MD. The hotel, which is also home to a beer and liquor store and several seasonal apartments, is known for its great rates during Ocean City’s ‘in’ season.

What some visitors to this Ocean City hotel don’t always know or suspect when they book their annual vacation is that the Wellington is overflowing with a rich history unlike that of any other establishment in the coastal town. The Wellington Hotel has been in business since the 1930’s, was owned by one of Ocean City’s finest Mayors, was operated by a prominent Ocean City family, and was a choice hotel for several generations of families visiting the resort town.
“A few months after I took over operation of the Wellington, this letter came in the mail,” said Pasquale D’Ascoli, current owner and operator of the hotel, showing the white envelope he opened addressed to ‘Friends at the Wellington Hotel’.
Inside was a hand-written letter signed by a man named Richard accompanied by a Wellington brochure printed on thick, glossy, yellowed paper. The letter read,
“Hello My Friends,
It has been some forty years since I last stayed at this fine old hotel. My mom and grandmother also spent a week or two each summer there. In 1958, when I was seven until I was seventeen, and began camping at the campgrounds near Frontier Town, my grandmother and I stayed in room #9 at your hotel.
The owner of Hotel in the ‘40s and ‘50s were Hugh Cropper and his wife. He was the former Mayor of Ocean City.
My grandmother and I would always take dinner at the Dinner Bell on Seventh Street before walking to the penny arcades and amusements on the boardwalk.
In crossing I hope you will frame this old ad for your lobby.
Sincerely,
Richard W. Glory
P.S. Please drop me a line back. Have I got some stories about your town!”
The Wellington brochure (presumably from the 1960’s) included with the letter, featured a black and white photo of the 4-story hotel, reservation rates, and some information about the hotel.
“The Wellington is centrally located in Ocean City and is very convenient to stores, churches, restaurants and amusements. It is only one door away from the ocean. The Wellington has been enlarged to include what was formerly The Benson, which has been completely redecorated and remodeled,” read the brochure.
The brochure was signed by Mrs. Marietta Bounds, Mr. and Mrs. John E. Austin (owners and managers), after a line reading, “We shall look forward to seeing you this summer.”

About the Past Owners

Mr. and Mrs. John Austin had a daughter, Marietta, named after Mrs. Austin’s mother, Marietta Bounds of Ocean City as described in the Salisbury Times newspaper printed on July 25th,1964. Mr. Austin’s mother managed the Wellington with her son and daughter-in-law.
In the 1960’s a single room for one person cost $2.50 from May to June or $3.00 from July 1st through September 8th. To have running water, you had to pay an additional $2.50 – $3.00 per night per room. To add a twin-sized bed to any room was an additional $.50 per person. Two double beds slept 4 individuals and included running water for $3.00 from May to June and $3.50 from July 1st through September 8th. An apartment rented for just $75 per week for a family, or $4.00 per night. Guests who booked an entire week received one extra day for free.
“The author of this letter was right; the mayor did own this hotel. He and his wife owned and operated the Wellington in the 1960’s,” said Navarra.
Mayor Hugh T. Cropper, Jr. was a graduate of Ocean City public school and Goldey Beacom College in Wilmington, DE. He was the owner of the Benson Hotel (which is now known as the Wellington Hotel) and Misty Harbor Motel (which was eventually taken over by his son). Cropper was a farmer, avid hunter, and surf fisherman known in Ocean City for his development expansion annexations.
As Mayor, in 1965, Cropper was concerned about unacceptable water pollution levels and annexed 41st Street to the Delaware state line. His actions opened up many options for possible expansion of the town of Ocean City.
The current inlet parking lot, conveniently located between the beach and the boardwalk in south Ocean City, is named in remembrance of Hugh T. Cropper.

The Dinner Bell restaurant was actually located on 3rd Street in Ocean City, not 7th Street like Glory described in his letter to Navarra. As a youngster in Ocean City, it can be assumed that Glory probably didn’t mind the 4 block walk with his grandmother to the diner.
Ilow Harrington, her husband William Harrington, and her husband’s brothers all owned and operated the Monticello Hotel at 3rd Street and Baltimore Avenue. Located in the hotel was the Dinner Bell Restaurant. Ilow and William’s Dinner Bell was one of the most popular restaurants on the boardwalk during the ‘50s and ‘60s. The restaurant and Monticello Hotel were sold in 1986 after several renamings.

“There still is an arcade right up the street on the boardwalk,” Navarra said while pointing towards the ocean as he stood in the lobby of the old hotel.
On the boardwalk at 9th Street, an arcade sits facing the ocean. One can suspect that this yellow-bricked building, with a flashing sign reading Funcade Arcade, was one of Ocean City’s original penny arcades. Of course, the arcade no longer accepts pennies and nickels for one-time plays but not requests multiple quarters or dollar bills for a play.
Several vintage games, like the ‘Guide to Romance’ machine, located in the far right corner of the arcade take pennies. An eerie looking gypsy also grants a fortune at the arcade for just one cent.

Since decades past, the Wellington has been remodeled, updated, and reconfigured many times.

“In the letter it mentions room number 9. This is funny because we no longer have a room number 9,” said Navarra, “The whole hotel used to be laid out differently. The lobby used to be in a different room, the hotel was added on to make more rooms, and now there are more apartments.”
Today, the Wellington has five different types of rooms: Standard for 2 guests, Standard for up to 4 guests, Ocean View rooms, Apartments, and Efficiencies. Rooms can be rented nightly or weekly while apartments and efficiencies can be rented for longer periods of time.
For more information about the Wellington Hotel, visit their website: OC Wellington.
View the gallery below for more images of the hotel.
Photos by Ami Reist. Older photos from the archives of the Ocean City Life-Saving Station Museum. Photo of Richard’s letter and the Wellington brochure provided by Guy Navarra.

A Lucky Girl’s Life: Dirty Secrets to Keep You Healthy