The Winterfest of Lights, Ocean City’s renowned holiday lights display is celebrating its 20thAnniversary this season. Last month, Ocean City’s Mayor Rick Meehan, joined by a large crowd of community members and the youthful congregation of Ocean City Elementary’s OC Stars singers, to officially usher in the 20thyear of the event. Immediately thereafter the entire display was illuminated and will remain illuminated until January 1st, 2013 – welcoming thousands of visitors to celebrate the holiday season.

Over the next few weeks children and their families will board the Ocean City boardwalk tram and take a holiday journey through close to one-million lights at Northside Park in north Ocean City, MD.
They’ll see the Wizard of Oz, the 12 days of Christmas, and a myriad assortment of holiday characters who twinkle and move in time to traditional holiday songs, just before the music shifts, taking an ominous turn. As the train rounds the bend, with the familiar opening riff to Jaws in the background, an illuminated shark will seem to burst from the water! It’s a comedic take on an iconic image, which could only be featured in a waterfront holiday display, found at the beach.
Aside from the scenic train ride, a huge indoor tent serves as the waiting grounds for the ride, and also houses Yukon Cornelius’s Gift Shop, Santa’s House, and a refreshment area. So much of the Winterfest of Lights experience is tradition, providing a wonderful way for the community and visitors alike to celebrate the holiday season on the shore.
Want to see what Winterfest of Lights is all about? Check out this great video below, produced by Dave Messick of Unscene Productions for the Town of Ocean City, Maryland. This piece, delivered to the county’s tourism department, features scenes from opening night at the wonderful lights show.
“I think it [Winterfest] is great for everyone—the children, the parents, and everyone getting ready for the holiday season. It takes a lot of effort between the Rec Department and Public Works. I was out there the day they started, and it was amazing the amount of work involved,” said Chris Klebe, President local business, OC Tri-Running Sport Inc.
To read more about Winterfest of Lights, check out this ShoreBread article: Winterfest of Lights Welcomes 20th Season.

20th Annual Winterfest of Lights
Northside Park 125th Street and the Bay, Ocean City, MD
Ends January 1st
Sunday – Thursday 5:30 – 9:30 pm
Friday – Saturday 5:30 – 10:30 pm
Admission: $5 for anyone age 12 and older. Free for 11 and under.
Santa is available for photographs through December 23rd.
To commemorate the 20th Anniversary, there will be a special fireworks display on New Year’s Eve. 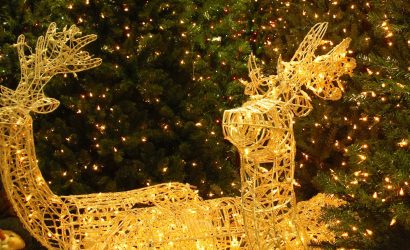