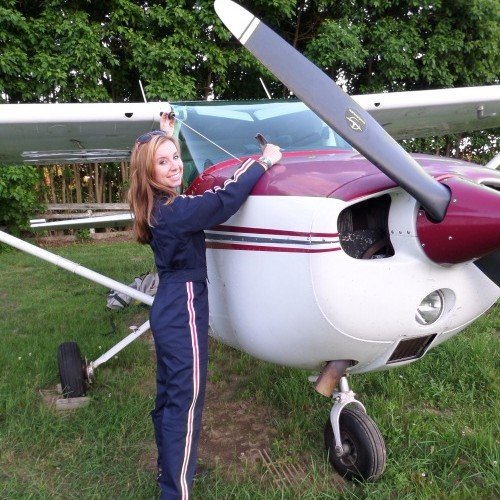 Up, up and away! On the tail of the OC Air Show, a Salisbury University student will take to the air in her own plane as she embarks on a journey of epic proportions. From June 16-19, Emily Lewis, a junior geography major, will be competing in the Air Race Classic. The event stretches from California to Pennsylvania as part of the annual all-female aviator expedition across the country.

Lewis’ inspiration to take part in the event came from a variety of sources. Many of Lewis’ family members, including her grandfather (who was a WWII pilot and her father who flies for American Airlines) are licensed pilots. Lewis grew up watching her father soaring high above her at airshows, leading her to think to herself “Hey, Dad, I’m going to do that one day.”

But Lewis didn’t think that acquiring her private license was enough, so at the beginning of this year she went the extra mile and earned her multi-engine certification. This will come in handy as she flies her Beechcraft Travelair, the only multi-engine aircraft in the competition, over the course.

Lewis also finds great joy in her pastime because of her fascination with different fields of science. Since she was in elementary school, Lewis remembers enjoying learning about weather. She has since studied subjects such as atmospheric studies, environmental land use planning and paleoatmospheric studies — the examination of weather throughout history.

During the Air Race Classic, Lewis and her copilot Alicia Sikes will combine both geographical and meteorological skills on their path through the sky. On the journey, the pair will be mapping landing and take-off destinations, weather patterns and departure times among other scientifically affected aspects.

With all of these credentials under her belt, Lewis has expressed plans to pursue a career in meteorology, receive her commercial pilot’s license, and become a flight instructor. According to a recent Salisbury University Press Release, she also intends to continue encouraging more women to take to the skies by being a member of the Ninety-Nines, an international female piloting club. Lewis also has her sights set on another elite flying event, but this time in France!

From the staff here at ShoreBread, which is comprised of a small contingent of people who are not so keen on flying, we wholeheartedly wish Lewis well on her truly inspiring trip!