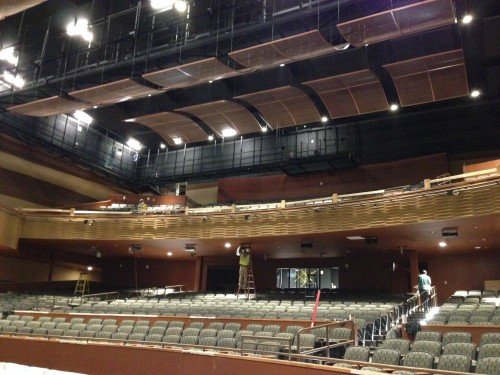 The new Performing Arts Center will host concerts, musicals and theatrical productions as well as seminars. The construction of the center is the second phase of a major Convention Center expansion that began on October 20th, 2013 with demolition work in the old sections of Hall C on the ground floor of the Convention Center and a demising wall going up on the second floor in what used to be part of Halls A and B. The second phase cost $14 million and is being funded in part by the state through the Maryland Stadium Authority at $5.7 million. The Town of Ocean City is funding the remaining $8.3 million, which is being covered by a 2013 bond issue.

Beginning this Saturday, December 13th the real party starts! The Texas Tenors bring their “Deep in the Heart of Christmas” show to the all-new Ocean City Maryland Performing Arts Center, at 8PM on Saturday, December 13th. The Texas Tenors feature JC Fisher, Marcus Collins and John Hagen and have performed for over 100 million people around the world. They got their big break in 2009, the same year that they made their TV debut on NBC’s America’s Got Talent becoming the highest ranking vocal group in the history of the show. The Tenors sing everything from country, pop, classical, broadway and much more in the entertaining show they have planned. Joining them, will be The Remainders. They represent a lifetime of music, having written famous and prize winning songs for a wide variety of styles of music. Tickets are now on sale at the OC Convention Center Box Office or online on Ticketmaster. Prices are $34, $45, or $55. So celebrate the new OC Performing Arts Center and ring in the Christmas season with this once in a lifetime show. There’s no better way to spread Christmas cheer, then singing loud for all to hear! Merry Christmas!

**Photo by Joanne Shriner of The Dispacth**