Sometimes when we visit the boardwalk in Ocean City, all we see are the rides, the games, the throngs of people… admittedly we often fail to see what is going on behind the scenes or to even notice the rich history that surrounds many of the family owned businesses. We were reminded of that rich history this week when we sat down for an interview at the Golden Plate on 1st street and the Boardwalk. You know the place – irresistibly fresh lemonade, overstuffed gyros, sinfully delightful funnel cakes – but what you might not know is that the Golden Plate has been serving Ocean City patrons for 45 years!

We caught up with Yesim Karaman earlier this week at the Golden Plate, gratefully taking a seat in the shade and accepting her mother’s gracious offer for some of their refreshing lemonade. On a brutally hot day like this past Tuesday, an ice cold lemonade was a very, very welcome reprieve. It was soon apparent that the welcoming and friendly vibe was simply business as usual at the Golden Plate, where loyal customers have become like family to the Karamans during their four and a half decades of service.

The original Golden Plate opened its doors in 1970 and was located in the 33rd Street plaza where you’ll now find Papa Johns. “It was the original late night spot,” said Karaman, noting the number of local who still talk about eating at the Golden Plate for a date night or noting how they would stop in after a night of dancing at the Paddock. “We would feed you even if you didn’t have the money,” Karaman quipped, paying homage to her grandfather’s generous spirit and strong connection to his customers.

In 1998, the Karaman’s moved the Golden Plate to its current boardwalk location. While her grandfather has since retired, he can still be spotted behind the counter every now and then. Of course customers still look for the familiar face, asking for him frequently throughout the summer. Today, Karaman and her parents and younger sister are at the helm, working as a family summer after summer to maintain the traditions of their business.

Over the years, the customers have become extended members of the family for the Karamans. The loyal following is one of Karaman’s favorite aspects of the business; in fact, many customers exchange Christmas cards with her and her family, stop in year after year to say hi, or even make special requests for her mother or her father to make their gyros. “Everything has really happened here at the store for us,” she added, noting that many of their most memorable moments have been shared under the roof of the Golden Plate.

As we chatted with Karaman we couldn’t help but get a deep craving for some fried Oreos, which her mother quickly picked up on, returning with six heavenly balls of dough enveloping double stuffed (yes, double stuffed) Oreos and sprinkled with power sugar. ‘Amazing’ has never been a more fitting word…

In addition to the fried Oreos, funnel cakes and gyros are the standout items at Golden Plate. Their funnel cakes were even featured in Baltimore Magazine recently as one of the 50 Reasons We Love Our Beach. And we have to agree. Funnel cakes are one of those staple boardwalk foods that rank at the top of our list alongside Thrasher’s Fries. The Golden Plate is on point with their funnel cakes, with an equally tantalizing selection of toppings including cinnamon, caramel, Nutella, Bavarian crème, éclair, ice cream and blueberries to name a few. It’s typical for customers to stop by for a funnel cake to take home with them at the end of their vacation added Karaman. “We’ve sent our funnel cakes as far as Pittsburgh.”

For the savory snacker, order the gyro. What arrives is a warm pita overstuffed with lamb, chicken or veggies. “I usually tell customers that if they have a sweet tooth, get the funnel cake, and if they are really hungry, get the gyro,” advised Karaman. Other menu items include ice cream, pizza, breakfast sandwiches, pretzels, chicken tenders…all the typical boardwalk favorites.

By this point we were itching to devour our funnel cakes (which we begrudgingly shared with the rest of the staff back at the office) but not before snapping a few photos for you all to enjoy and drool over of course. In OC or planning a trip soon? Be sure to stop by the Golden Plate to support this local, family owned and operated Ocean City tradition. And for a truly decadent treat, opt for ice cream or Nutella with your fried Oreos;) 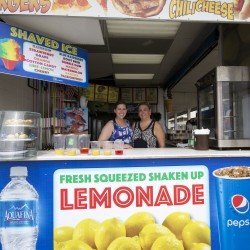 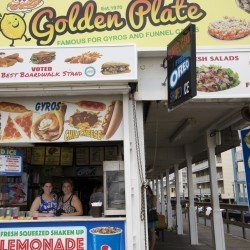 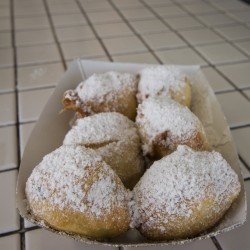 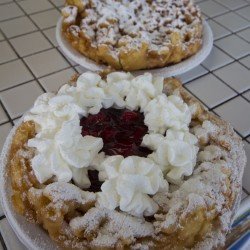 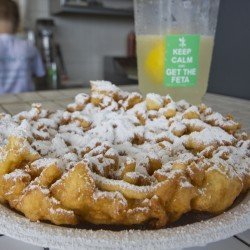 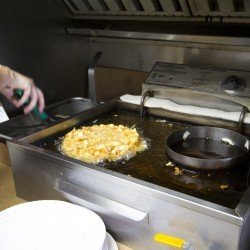 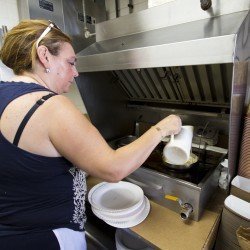 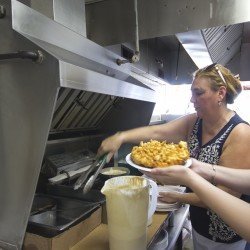 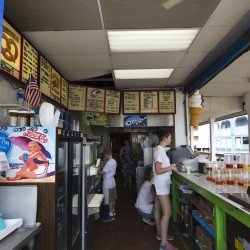 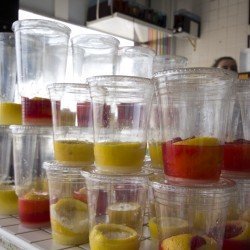 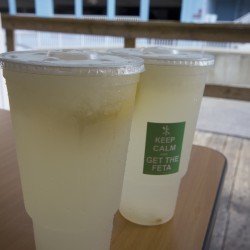 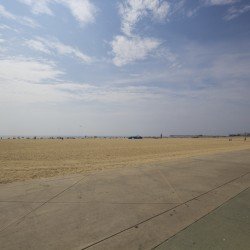 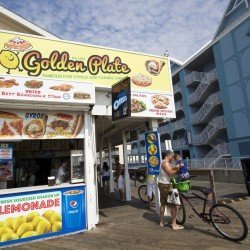 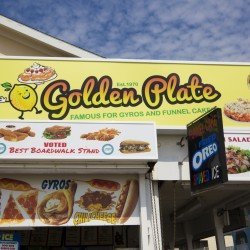 Weekend Happenings: Blueberries, Yoga at the Zoo, Nightmares and More…