I left you kind of abruptly last week and without closure. For that I apologize. I won’t belabor the intro, I’ll just pick up where I left off. My wife had arrived safely in Baltimore to attend her grandmother’s funeral services. She had our youngest daughter, her parents, and her sister with her and they were all staying at my sister’s house. I stayed behind with our other two daughters and was reasonably certain I was developing a case of shingles though I had not yet visited a doctor.

Tuesday morning came and I awakened to the sound of a cranky teething one-year-old, and a very old dog whose vital signs I was checking routinely. The way things had been going so far this week, all I could think was, please don’t let this dog tap out on my watch. I also awakened to a rapidly spreading rash, and an even more rapidly rising level of pain. The 7-year-old is already a teenager in many ways, so she wouldn’t wake up for a few more hours. My morning was spent making sure all humans and canines were fed and that all of their poop found its way to the proper place. I tried to get as much done as I could that day in a futile and desperate hope that my wife could come home to a clean house with the laundry and dishes done.

The girls spent the day rough housing and on more than one occasion I rushed into the room to find them both in tears. At one point, I ran into the room to find the 7-year-old crying and bleeding from the mouth. She had caught the back of the baby’s head. The baby was crying and had a huge knot protruding from her head immediately like a dorsal fin. By the time it settled, she looked like a Klingon. I scooped the little one up, and she head butted me, this time using the front of her head. She slightly dislocated my nose in the process. It wasn’t broken, but I did need to set it back in place. The dog lay there oblivious to everything not realizing how lucky she was. This was my day in a nut shell, so needless to say there was no time for a doctor visit. Though my older daughter did make me take my shirt off every couple hours so she could monitor the progress of my rash.

This next part I was going to leave out just on pride issues alone, but I think it illustrates perfectly how my week was going. Shortly after 9 AM that morning, while I was in the process of changing a tragically soiled diaper, there was a knock at my door. I opened the door while holding the baby in my arms to see an unfamiliar man standing on the lower step to my front porch. Oddly, he asked for my wife. I said that she was out of town at a funeral but that I was her husband and I asked if I could help him. He, presumably having done this many times before, was standing on the bottom step as he spoke to me safely out of arms reach. I noticed that his car which was visibly marked on the side with the name of the company he represents was parked not in my driveway, but out on the street and was still running. This I can only assume was in case he needed a quick escape.

This man spoke to me in an accent that wasn’t even actually an accent. It was just the lazy sound of a complete idiot who never took the time to learn proper English. This jackass had probably spent his entire life within 40 miles of where he now stood and yet I practically needed subtitles to discern whatever he was mumbling. He then said to me in his backwoods jargon loud enough for any of my neighbors who might be outside to hear: “I’m here to cut the power off”. It was abundantly clear to me that he had deliberately raised his voice as he delivered this unexpected news. He did it with a crooked, sneering grin that all but confirmed my theory that somewhere in his lineage there were some unnatural relations between a brother and a sister. If I had to venture a guess, I’d say that this specimen standing before me was no more than a generation removed from that act. But then again, I guess there aren’t too many MIT grads lining up in the waiting room to interview for this job.

I felt a brief wave of rage take over my body. Not so much the result of the shocking news I had just received, but the manner in which it was delivered. At his moment, it really worked to his advantage that my right arm was holding a fussy, squirming baby, and that I was rapidly losing the use of my left arm. Here it is, nine o’clock on a Tuesday morning, it’s already 98 degrees and rising, I’m in whole lot of pain, I’m having a monumentally bad week to this point, I’m holding a baby, and I now have Cletus standing on my porch telling me he’s here to pull the plug on me. Oh, the hits just keep on coming! I kept my calm though, and fortunately had just enough cash on hand to stave off the spawn of Jethro and Ellie-Mae from performing the task that he no doubt actually enjoys. If there’s a God, this goof will never breed. As it turns out, there was an addressed, stamped envelope with a check inside tucked between the seats of our other car which I would not discover until the next day. I’m ashamed to say that one had quite literally slipped through the cracks on us. But at no point had my wife or I received a phone call or e-mail from anyone representing this Mickey Mouse company who unfortunately control the functionality of just about everything in my home that runs on something other than batteries or breast milk.

I had to work that evening and as the day went on, I realized that my wife would not be back in time. There are few things in life I hate more than arriving late for work. I knew now that I would have to find a sitter and on short notice. There is a very short list of people whom I not only trust, but would be comfortable asking such a favor of on such short notice. I sent a text message to a very dear friend of ours, a friend who would walk through the fires of Hell for us without question. She was working her day job, but of course agreed to help me out. She is the only person I’ve ever met whom I describe as follows: If you’re not in love with her, than you haven’t met her. She arrived at my house within 15 minutes of the end of her work day. She walked in the front door, looked at me and said: “Go. I know you have to get to work. I got this.” I gave her a quick peck on the cheek, thanked her and was on my way. I didn’t even leave her any instructions, but somehow I instinctively knew that my kids were in good hands. Remember this wonderful young lady as she will come into play later in the story.

I went to work, got through my shift, and performed my job to the best of my ability that night. I thought I kept a pretty good poker face given my condition, but apparently that’s not my strong suit. I believe my lack of upbeat sarcasm throughout the course of the evening was the telltale sign to my friends and coworkers. Particularly the ones whom I’ve known for five or more years were becoming concerned about me. I did my best to reassure them that I was fine. Little did they know as they all left that night that it would be the last they would see of me for about ten days or so.

As the night went on, the pain increased, the rash spread, and I was slowly losing the use of my left arm. I was a bit concerned, but it was superseded by my concerns over the recent events in my wife’s family, and the ever growing anxiety over taking care of my own family on limited sleep and finances. And now, as it seemed, my physical abilities would be limited as well. I got home from work that evening around 3 AM. My wife and youngest daughter had made it home safely. The dog thankfully had survived her stay with me and was now back at home with my in-laws. I did my usual nightly ritual: take off my tie, hang up my keys, and go room to room to kiss my girls goodnight and watch them each sleep for a few minutes. This is my “me time,” my happy place, my moments of solace, my decompression chamber, or whatever you want to call it. It never matters what kind of day I had, at the end of the night when I get to kiss each of these little beauties, and watch their peaceful slumber for just a few minutes, everything else it the world goes away. I know they are safe, and all is right with my world. I eventually made my way to my own bedroom where I found my lovely bride waiting up for me. I wanted to hear all about her trip, and comfort her as best I could. I think I was doing alright until I took off my shirt. I don’t recall her reaction verbatim, but I’m pretty sure it rhymed with “goalie spit.” She wanted to rush me immediately to the hospital, but after much pleading, I assured her that I would visit a doctor first thing Wednesday morning.

Well, like only I could do, I’m trying to tell you a story about a week that seemed to be ruled by Murphy’s Law, and all the negative cosmos in the universe, but ended in a way that can make even the biggest cynic on the planet believe in the power and beauty of humanity. For that glorious ending, you’ll have to check back next week, for after two columns and roughly 4000 words, I’ve only gotten through Tuesday.  The ending is coming, and it’s worth the wait, I promise. 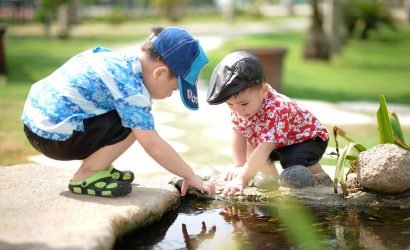 From Kindergarten to Tinkergarten

800-feet into the Air: Parasailing in Ocean City