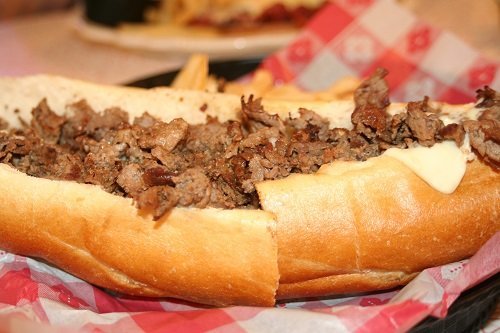 When we heard rumors of a Tony Luke’s coming to OCMD, we decided to do a little investigating before our interview with owner Mo Salem. A little sleuthing uncovered a Rachel Ray clip in which she extols Tony Luke’s for having “the best pork sandwich on planet Earth!” Ok, our interests were officially piqued. “They started with their cheesteaks, but everything is good,” said Salem of the rapidly growing sandwich franchise, Tony Luke’s. “Their cutlets are amazing. It’s a fresh, never frozen chicken breast, breaded and cooked to order.” [Cue drooling and stomach rumbling]

Tony Luke’s will open up shop next month at the corner of 33rd Street and Coastal Highway in OCMD, taking the place of Bahama Mama’s. Touting themselves as “the real taste of Philly,” the Tony Luke’s franchise has a loyal following, with locations throughout New Jersey and Pennsylvania. The fresh ingredients, massively overstuffed subs and sandwiches, and mouthwatering menu options are what fueled Salem to open up one of his own here in Ocean City. “They have a huge following, which I’m quickly finding out. The feedback has been phenomenal.” Salem went on to note the number of people they’ve seen pull over in the past few weeks elated to see the ‘Coming Soon…’ sign in the window.

What to expect at Tony Lukes? For starters, their signature cheesesteak subs, which are made with thin-cut (never chopped) 100% rib-eye steak and topped with your choice of cheese – American, Kraft Cheese Whiz, or Provolone – and toppings. The roast pork sandwich (you know, the one Rachel Ray declared the best pork sandwich on planet Earth) is a massive pile of slow roasted pork topped with au jus and tucked between a fresh baked roll. Make it a Pork Italian with sautéed broccoli rabe or spinach and provolone. Also on the menu are chicken cheesesteaks, the chicken cutlet, TL’s burger, and South Philly Bites, which remind of us eggrolls except stuffed with either buffalo chicken, cheesesteak or roast pork. For the veggie head in your group, there’s the veggie sandwich, which includes sautéed broccoli rabe, sautéed spinach, sweet peppers, fried onions and marinara sauce. Pair any sandwich with a pile of their natural cut fries, which come plain, seasoned, or topped with Cheez Whiz (seasoning s include chipotle BBQ, salt & vinegar, or ‘Maryland’).

Salem described the atmosphere of the soon-to-open space as family-friendly, with breakfast, lunch and dinner available. Lunch and dinner will be available year-round, which is always music to the ears of locals during the off-season. For breakfast options, think all of the sandwiches mentioned above but topped with eggs. “It’s not everywhere that you can get a massive cheesesteak topped with eggs and hash browns for breakfast,” said Salem.

So when can you get in to Tony Luke’s for a taste test (or for the Tony Luke’s diehards, to be reunited)?? Salem is shooting for a soft opening between mid-May and Memorial Day Weekend. Stay tuned for more from us on our website and social media pages on Tony Luke’s – you know we never pass up a chance to explore new area dining options!