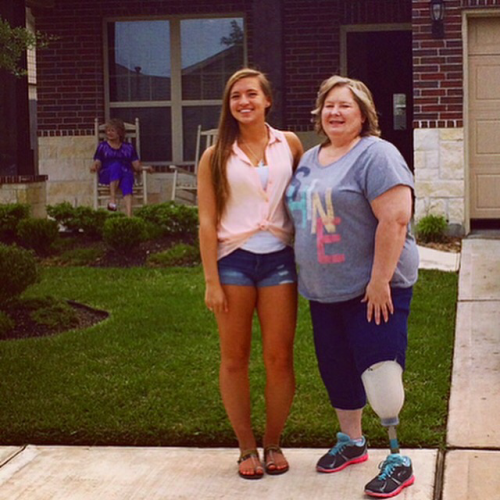 At ShoreBread, we have always made the conscious effort to leave the heavy journalistic reporting to our local news outlets, but that doesn’t mean we stick solely to the ‘fluff’ pieces. Our mission has always been to present our readers with positive stories based on coastal life here on Delmarva, including inspirational stories and fundraising efforts. We were recently  tuned in to an inspiring cause that we couldn’t resist sharing with our readers – a 390 mile run from Cumberland, MD to Ocean City, MD to raise money and awareness for Limbs for Life. We caught up with Caitlin Adams this week, the college freshman who has spearheaded the effort and who is currently gearing up for her big run on May 23rd.

“I thrive on having two legs, I think it is such a blessing…in more ways than one. We have two legs to walk and run…not to remain in the same place, but to always move forward, to learn, and to meet new people and do as much as we can to make a difference for the time we have here. THAT is why I am doing this run,” Caitlin explained. Caitlin created Run Across Maryland after struggling to find a purpose and a renewed passion in one of her favorite pastimes, running. The idea first came to fruition during her junior year in high school as she was competing on the track team, but it wasn’t until the end of her first cross-country season in college that she decided to act, planning a 390 mile run to raise money for Limbs for Life.

“I chose Limbs for Life because Limbs for Life has no limitations on the amputees they help. They help veterans who have lost their limbs, children, or people who have been in accidents. I love that they help everyone.” Another major factor for Caitlin was the constant reminder over the years that running and walking are simple, daily activities that we all take for granted. “Throughout my childhood I went though a few rough patches that would have knocked anyone down emotionally,” she said. “Running is what helped me though…it was the one place I could feel alive, think clearly, and just feel good. Everyone deserves to be able to get though their problems in a healthy way and everyone deserves to have the opportunity to walk.”

The run will begin on May 23rd in Cumberland, MD and continue throughout the month across Maryland, culminating in Ocean City on June 27th. Each day is mapped out, with the number of miles varying from day to day along with a few rest days. Interested participants are welcome and encouraged join Caitlin for any portion of the run. All runners are asked to raise or donate at least $50.

To date, Caitlin’s Run Across MD for Prosthetics team has raised $13,587, $10,048 of which was raised by Caitlin. 100% of the money raised will go directly to clients on the waiting list at Limbs for Life. Every $2500 to $3000 raised is another limb for someone, which means so far, Caitlin’s Run Across MD has raised enough money to provide FIVE limbs.  And that’s just the beginning…

With 234 people currently on the Limbs for Life waiting list, Caitlin has no intentions of stopping slowing down. “My goal is to raise $100,000. That will mean 40 people will get their limb and can come off the waiting list.” This the first fundraiser Adams has organized, with plans for future projects as well. But first things first, her upcoming run. “Many people can also help by donating food, water, new running shoes…anyone is helping if they donate to the fundraiser at www.runacrossmaryland.com.” Runners interested in joining can find the route info. with dates and mileage on the Run Across Maryland Facebook page.

Caitlin also recently traveled to Texas to meet one of the amputees (pictured above) who has received a limb through Caitlin’s fundraising efforts. “There is an entire world out there to discover,” said Caitlin at the end of our interview. “I want to see it all – good and bad –  and experience and live it. I want to make a story…one that I can be content with, look back on and smile, and share with people so that they can do the same.”

With a significant and lasting impact already underway, and a building momentum, we have no doubt that Caitlin will go above and beyond her goals. We will be following the progress of Caitlin’s Run Across Maryland, with plans to be on the scene as she crosses the finish line in OCMD. Show your support by visiting her page, sharing her story, or participating in the run!