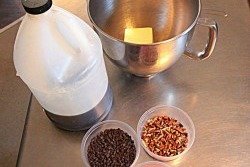 Just off Main Street in Berlin, MD sits a little bakery beloved for their cupcakes, fresh breads, and cookies.  Perhaps what makes these treats so delicious, isn’t so much the ingredients used, as the ingredients left out.  Baked Dessert Café is an all-natural bakery, which means that their hand made goods don’t contain preservatives, trans-fats, artificial colors or flavors.  They choose real butter over Crisco, pure Madagascar Vanilla instead of imitation, and use all-natural food colorings made from beets (red) and turmeric (yellow) rather than the artificial dyes.  The difference is not only in the taste, it’s simply healthier.

In a modern world where it’s commonplace for children to be diagnosed with a host of disorders often linked back to food allergies, it really does matter what goes into the food that we eat.  This is a subject Baked Dessert proprietor Robin Tomaselli knows first hand.

“When my son was young, we found out he was allergic to red and yellow food dyes.  It really became apparent after he was eating Skittles, and immediately after started acting strange.  He actually said to me, ‘mom I don’t think I can eat anything red or yellow,’” Tomaselli reflected.

In addition to her son’s allergy to artificial food dyes, Tomaselli’s daughter suffered from migraines, eczema, and asthma—at age ten.  Numerous doctors couldn’t figure out why.  A nutritionist consulted figured out the problem immediately—an allergy to Gluten.  Once the Gluten was out of her diet, the symptoms disappeared.  This personal experience with her children, lead Tomaselli to cook for them in a completely different way—an approach she brought to her professional life as a baker.

In April of 2009 Baked Dessert Café opened in the former Pink Box Bakery building.  This past summer the bakery moved to their new location.  Throughout the roughly two and a half years in business, Tomaselli has met many customers who say their children suffer from behavioral issues they have linked back to food allergies, and others whose children have been wrongly misdiagnosed as having everything from autism to learning disabilities, again the issue was an allergic reaction to food—often the preservatives, dyes, artificial ingredients, or Gluten.

Though the bakery was already all-natural, Tomaselli and sister Shelly have responded by carrying Gluten free cupcakes daily, and always offering a number of choices that are naturally Gluten-free like coconut macaroons, rice pudding, chocolate truffles, and granola.  They will make any custom order Gluten-free and also sell five pound bags of Gluten-free flour to customers—something that can’t be purchased at grocery stores.

In addition to aiding the community by offering all-natural and Gluten-free choices, in her storefront, Tomaselli also has baking tips, techniques, and even recipes to share–knowledge certainly coveted by anyone who bakes at home.

Tomaselli recently invited ShoreBread into her kitchen to learn how she makes her to-die-for buttercream frosting—it’s surprisingly simple.  That’s the key with all-natural foods, the fewer ingredients the better!

Put all ingredients into a blender and blend until smooth.

*Tomaselli recommends using salted butter, as it cuts the sweetness of the confectioners’ sugar.

“Don’t spend the extra money at the grocery store, all brown sugar is, is sugar and molasses.  Simply put a little of each into a blender and you have brown sugar.”

Find more on Baked Dessert Café in Berlin here.
Friend them on Facebook and find out about upcoming events, including a pumpkin carving contest with a $100 prize!